skip to main | skip to sidebar

I'm spending a lot of time lately with cassettes. This isn't because I'm a neo-hipster (I'm too old for that) although I have heard that cassettes are trendy again for them. It's actually because I've got a new old car! It has AM/FM/cassette so now I don't have to drive around wearing headphones!
Recently - really, really recently for this blahg - I explained to you how playing records on the radio every week was not necessarily a great boon to my music awareness. Well, this is a continuation on that thought, to some extent. 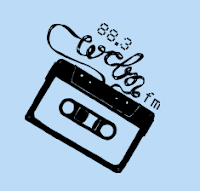 Being a radio DJ has also made it dramatically harder to create a good old mix tape. There's more than one reason for this so let me see if I can explain. In a sense, I make a mix tape every GD week, on the radio. I guess some people plan extensively for their shows and then of course there are commercial radio stooges who don't get to plan at all because a robot is doing it for them, but I don't plan at all beyond taking a few records from home and maybe thinking of what I'm going to play first.
I arrive about 30 minutes before the show, pull out a bunch of things I think I want to play, and with that stack, whatever I've brought from home, and listener requests (if I can get to them) I do the show. I've gotten really good at flying by the seat of my pants to a point where if a song is longer than four minutes and I have something in the queue after it, I feel bored and over-prepared. Describing it makes it sound like every show must be a total trainwreck but I listen to my archives every week and seldom gasp in horror.

With a mix tape you have the luxury of time, and also to go back and record over "She Blinded Me with Science" when you realize that hearing it once every ten years is enough. Futhermore, you are presumably creating something that you or a special someone will listen to more than once, whereas a radio show airs once and is then forgotten. It should be anyway. Unless you save archives. Anyway, they're different. Which is why it's ironically so much harder now to make a mix tape.
Perhaps this is all complete bullshit. Making a mix tape is a skill and an art. If you don't do it for ten years, you're going to be out of practice, just like the time last week when you tried to play "Michelle" on the recorder for your special someone but you couldn't do it because you hadn't played recorder since second grade. The more you do it, the better you'll get. So if you also have a car with a cassette deck, or you're a neo-hipster on the 'tapes are cool again' bandwagon, then let's make each other some tapes. I like ones I can sing along to while driving.

Friday, June 6: Listen to the music

Friday, May 30: Get a headache

Special boner bonus addition edition: Saturday/Sunday, January 5: Brandok and I co-host a three-hour metal show.
LISTEN IF YOU DARE
Read the playlist (if you can.)

Friday, December 27.
Just another day of awesome radio and no best of 2013 list.

Friday, December 20.
Hit me with your rhythm stick.

Friday, December 13.
This is why you are overweight.

Friday, November 29.
May I congratulate myself on a wicked awesome and twisted segue from VOMITRON into RUN-DMC. Yes I may.

Friday, November 22.
What it sounds like when CDs fall off shelves and hit you in the head.

Friday, August 16. So sexxxcited for Mudhoney, played a bunch of local stuff and a vintage 45 from Boston's The Drive.
LISTEN

Friday, February 22. One of my biggest inspirations as a radio DJ was tuned in for part of this show. LISTEN PLAYLIST

Other blogs we love